Yuty is an NPC from the Temphere campaign universe. She is a winged kobold from the Shifting Mist Tribe, and formerly the captain of their winged kobold scouts. She was secretly working as a double-agent of the Black Claw, but turncoated against the bandits when things started going out of control.

Yuty was the captain of the winged kobold scouts for the Shifting Mist, and by all accounts was very loyal and good at her work. Though not the most enthusiastic about the presence of Mire's Edge in the swamp, she wasn't initially in the pool of scalefolk that Wenrule recruited into the Black Claw. Things changed for her, however, one day when she was called to help with a scout who'd been injured on duty. She, the injured scout, and one other winged kobold were then ambushed by a party of six humans who seemed bent on killing the kobolds. Unable to defend themselves against such numbers, the scouts might have died... but for a timely rescue by Wenrule and the young dragon Dodriar. They killed the humans, saving Yuty and her scouts.

It is presumed based on what Yuty claims later that she might not have joined the Black Claw immediately then, though the exact chronology is a bit shaky. She seems to have gone back to the village of Kuria and reported the attack to the leader of the Shifting Mist, Apogri (though she lied and claimed the human attackers were driving off rather than killed, to cover from the Black Claw members who'd saved her life). To Yuty's immense displeasure, Apogri did not immediately seek justice for this attack. Instead, she advocated to try and talk to the folk of Mire's Edge, and discern based on diplomacy what had happened. Angry that Apogri didn't seem to be taking the situation seriously, and seeing the Black Claw as the only ones willing to do something about the aggression of the human villagers, Yuty threw in her lot with the bandits.

She proved to be an invaluable asset. As captain of the winged kobolds, Yuty knew the troop movements of the Shifting Mist in advance, and could warn the Black Claw when to be ready for the scalefolk villagers to come hunting for them. This prevented the Shifting Mist from being able to find and apprehend the Black Claw, inadvertently driving a further wedge between them and Mire's Edge as the humans assumed the Shifting Mist wasn't even trying because they were secretly sheltering the bandits.

During her time with the Black Claw, Yuty became the minder, more or less, of Dodriar. She seems to have known him better than anyone else in the group, except perhaps for Wenrule, and definitely seems to have had the best relationship with him, as she was the only member of the Black Claw who still saw him as their leader after Wenrule came into possession of the Silvertongue Staff and started pushing the group to take further and further violent action that Dodriar didn't approve of. Ever shrewd, Yuty recognized that wanton injury and murder would draw attention the Black Claw could ill afford, and wouldn't help their cause. Wenrule wasn't willing to listen, however, and Yuty was forced to watch the situation devolve more and more out of control.

The party first met Yuty as a seemingly random minor villager in the village of Kuria. At Apogri's request she told them the story of how she and one of her scouts were trying to help a third scout with an injury when they were attacked by the six humans. As she had done with Apogri, Yuty lied to the party, claiming she had only driven off the attackers instead of revealing that they were killed. Either way, the incident seriously hurt the relationship between the Shifting Mist and Mire's Edge, a relationship already strained by the activities of the Black Claw. She asked the party why they wanted to help, and seemed to respect their desire not to keep getting ambushed on the road, but to be skeptical of their desire to help for the sake of helping, calling it "respectable, I suppose."

Eventually, the party traveled to the bottom of the Yuan-Ti temple where the Black Claw were hiding out, and overheard an argument between two of the Black Claw over how someone named "Wenrule" wasn't telling the gang about the fact that the halfling in the adventuring party they'd met was a gold dragon. The party was amused at first to learn the Black Claw still believed this, but their amusement was short-lived as the arguing parties revealed that they had their own dragon- presumably a real one.

After Wenrule and the unknown other person split off from each other, the party discussed what to do next. Agreeing that diplomacy was their best bet if there was indeed a dragon, they decided to follow the mysterious second person through the door they'd gone into. To their surprise, they found that the person was Yuty, her face painted with the Black Claw war paint. Yuty was startled to see the party, but after a moment she decided not to attack them. She asked how many people they party had killed on their way through the temple, but upon learning they hadn't killed anyone she relaxed considerably. Yuty explained what had been going on, and introduced the party to Dodriar. She asked for them to help resolve the badly out of control situation, to which they agreed, suggesting that the most pressing problem would be talking to Wenrule and securing his cooperation.

Wenrule proved less than willing to cooperate, however. Upon realizing that Yuty had turned on him, he went berserk, using the Silvertongue Staff to cast Charm Person on Dodriar, to Yuty's fury. In the ensuing fight Yuty sided with the adventuring party, eventually helping them overcome Wenrule and his flunkies and snap Dodriar out of his brainwashing.

When Cree used the spell identify to reveal that Wenrule had been using the charisma magic of the Silvertongue Staff to turn the rest of the Black Claw against Dodriar, Yuty suggested that the dragonborn should hold on to it, as she didn't trust any of the others with it. With Yuty and Dodriar re-assuming control over the group, the rest of the Black Claw agreed to disband. The entire group was returned to Kuria, where they were taking into custody by the Shifting Mist. (Though Yuty convinced Apogri to let Dodriar's parents handle his punishment.)

Yuty was seen a final time, bound up as the Black Claw representative when the Mire's Edge humans and Shifting Mist met to discuss what had happened. Yuty again provided the story of the attack on her and her scouts by the six humans, demanding an explanation for it. A Mire's Edge constable explained that he'd been looking for six missing people lately, each of whom had reason to bear a grudge (albeit not entirely justified) against the Black Claw. The two groups agreed to return to the old truce. Yuty was not seen again after that, and her ultimate fate is unknown.

A wary, practical-minded individual, Yuty has layers upon layers of mistrust where strangers are concerned, and tends to be skeptical of altruistic intentions. Despite this, she does seem to genuinely care about the people whom she is responsible for, and takes both her captaincy in the winged scouts and her authority in the Black Claw seriously. She has little patience for people whom she sees as weak or abusive leaders, expressing scorn for both Apogri's over-reliance on diplomacy even in the face of an open attack against her people, and Wenrule's keeping potentially dangerous secrets in the name of not losing his canon fodder. Though perhaps not the best judge of character, as she put herself in the position of following Wenrule in the first place, she is willing to acknowledge when she's made a mistake, and doesn't try to run from the consequences. 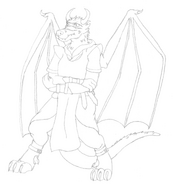 Sketch reference of Yuty.
Add a photo to this gallery
==

Retrieved from "https://dnd-temphere-and-thrrasir.fandom.com/wiki/Yuty?oldid=548"
Community content is available under CC-BY-SA unless otherwise noted.