Blue
Urycis Odyva is a tiefling-dragonborn hybrid and an old friend of Alyx. Like all Thrrasir NPCs, he is played by Shinko.

At least part of Urycis' family hails from Tsaltiui Shehad, a land inhabited primarily by dragons, dragonborn, lizardfolk, kobolds, and a few Yuan-ti. He claims his ancestors left as a result of "less than honest" ways of making a living.

He and Alyx have history together, but the party at large hasn't learned much about it yet.

Urycis is confident, gleefully snarky, and difficult to faze. He seems to have no regrets or holdups about his and his family's life of crime, but is very loyal to those he considers family. Fortunately this includes Alyx, giving the party an edge and a contact in a place they might not otherwise have it. 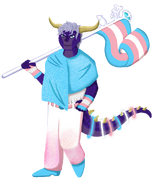 Urycis in the 2020 Temphere-Thrrasir Pride Parade
Add a photo to this gallery
Retrieved from "https://dnd-temphere-and-thrrasir.fandom.com/wiki/Urycis_Odyva?oldid=709"
Community content is available under CC-BY-SA unless otherwise noted.