Serena is an NPC from the Temphere Universe. She is an ally of the Garden Party and the Tempheran steward of Liadon Manor. Though she doesn't get involved in the party's adventures directly, she does offer occasional assistance in the form of advice, keys to the locked areas of the manor gardens and materials to set up a training ground.

Serena greeted the party initially when they arrived at Liadon Manor to answer Valanthe's call for adventurers. Though she was brusque at first, when Cree responded with a lowbrow joke Serena softened enough to smirk a bit. She and Valanthe gave the party something of a job interview, before concluding that they could probably handle the dangers present in the garden.

Serena was surprised when the party returned not long after entering the garden, significantly beat up by a trio of scarecrows. Serena informed the group that there shouldn't be scarecrows in the garden, as they had ward spells to keep birds out of the vegetables.

The following day, Serena's help was called upon one more time to provide a set of keys to get through the locked gates in the garden. She was further baffled by this news, as she insisted the gates shouldn't have locks (and was a little alarmed to learn that Anther had tried to pry the fence posts apart with a crowbar.) She did agree to give the party a set of keys, in the hopes one would help them even if none were for any garden fence locks.

The party wouldn't see Serena again until the conclusion of the adventure, when she like Valanthe was astonished and a bit discomfited by the size of the black thorn the group pulled from the disintegrated body of the monster rose.

Serena was present at dinner when Valanthe spoke to the party about the festival, and made a few jokes at Valanthe's expense along with the adventurers. She showed up again later with a group of the garden satyrs, to help them haul a wagon of pumpkins to the festival.

Serena helped the group to set up a training area on the grounds of the manor while they were waiting for Valanthe to let them know what was going on with his contact. She also talked and joked with the party during the setup process, and occasionally visited them there in the intervening time.

When finally Medea arrived to help guide the party to a monster hunter that could potentially give the party more information about the black thorn, Serena was on hand to inform the group that Medea was a kind of satyr called a korred. Serena also arranged for the party to be loaned mounts for the trip, including a riding dog for Dahlia. The party left Caellond at that point, and Serena remained behind to attend her duties in the manor.

Though she was initially mewed up with Valanthe working, Serena greeted the party soon after they returned from their trip. She was genial and welcoming, but also eager to hear what they'd learned from the monster hunter. As they were talking she revealed that Hush, who'd become ill and returned to Caellond ahead of the rest of the party, seemed to be feeling down on herself over having to abandon the mission.

She and Valanthe were disheartened when the party revealed that they hadn't learned anything useful about the thorn. After some consideration, they came to the agreement that the next best step would be to invite the party to the birthday celebration of the Feywilde queen and see what they could learn from the various fey nobility there. Serena offered the party invitations, quietly promising to help them parse the odd rules and eccentricities of the fey party.

The party talked to Serena a few more times before the ball, and finally the day of the party arrived. Though Valanthe was clearly distracted and focused on using the ball to learn what they could about the dangerous events they were caught up in, Serena quietly encouraged the party to also have some fun. Later in the ball she followed up on that encouragement when, upon learning that they'd spent the entire first hour of the ball working, Serena asked Cree to dance with her. During this dance the two spoke about Valanthe's relationship with his family (which seemed strained) and Cree revealed that she'd had bad experiences with elves in the past talking about her behind her back, though she didn't elaborate on it. Serena expressed sympathy, and reaffirmed her advice to try to have some fun during the event.

Though Serena can be very stern and buisnesslike when dealing with idiots, once her good favor is earned she reveals a lively sense of humor. She likes to joke and tease, and isn't too haughty for a bit of honest fun every now and then. She seems to take it upon herself to look after her boss, forcing him to take breaks and recruiting the party to intervene in situations where he might be stressed or overwhelmed. 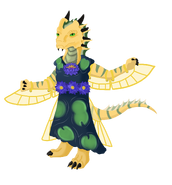 Serena dressed up fancy for the Feywilde ball!

A sketch of Serena by Shinko.

Community content is available under CC-BY-SA unless otherwise noted.