Married to his work

Qlu is an NPC from the Temphere campaign, and an ally of the party. He is an aaracockra who works in the city of Caellond as a tailor, and is the one Valanthe Liadon calls upon whenever he needs a fancy outfit made. Like all the Temphere NPCs, Qlu is played by Tiger.

Not much is known about Qlu's life before the party met him. It can be assumed that he has been working as a tailor for some time, as he has numerous apprentices and a permanent retainer with the lord of Caellond. Qlu is very passionate about his work, and takes every opportunity to work on a new and challenging commission.

Qlu was first introduced during the Festival of Masks interlude, where he was commissioned by Valanthe to create masks for the garden party (and a full costume in Cree's case.) He got on decently with most everyone, although became hostile with Anther when it was joked that she might damage her mask.

Qlu appeared again when the party returned to Caellond, having apparently been in talks with Valanthe about costumes for the upcoming ball in the Feywilde when the party got back to the manor. Qlu slipped word of the ball to the party, who weren't aware of it yet, and was agitatedly chased off by Serena.

Once the party had agreed to attend the ball, Qlu was called in again to confirm their measurements (and take new measurements for the party's new additions). He expressed particular excitement for designing a costume for the warforged Fracture, as her body type was one he'd never worked with before. In spite of the number of costumes that were needed and the time crunch, Qlu was able to pull it off, as well as designing outfits for himself and all of his apprentices, who were apparently also invited.

Qlu is a very passionate person, taking great pride in his work. However he is not too vain to take input from others, encouraging his apprentices to offer their own suggestions and insight and quizzing those he designs for closely to ensure that whatever he creates is to their taste. He is also very dramatic, and just about everything he says is an impassioned declaration, no matter how trivial.

Qlu in a costume of his own design for the Feywilde ball. 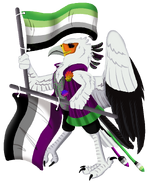 Qlu in the 2020 Temphere-Thrrasir Pride Parade
Add a photo to this gallery
Retrieved from "https://dnd-temphere-and-thrrasir.fandom.com/wiki/Qlu?oldid=707"
Community content is available under CC-BY-SA unless otherwise noted.