Hushed Flame, more commonly called Hush, is an NPC from the Temphere universe, a member of the Garden Party, and currently a member of the Main Party. She is a jaguar tabaxi fighter. She was added to the Garden Party to help with balance issues, but eventually parted ways with them after Fracture, McGuiggan, and Edith joined forces with them. As with all of the Temphere NPCs, Hush is played by Tiger.

Hush hails from Toborra, a part of the world that is largely tropical jungle/rainforest, and was born to one of the tabaxi clans that lived there. The mark on her shield, of a lightning bolt splitting a tree, is her clan's emblem. She trained in the skills of a warrior, specializing in the protectorate fighting style, and served most of her life as a soldier in Toborra's military.

However, before the start of the campaign she and her squad were sent to investigate when a nearby town failed to send a representative to an important meeting. When they arrived they found no one alive in the village, and all of the houses destroyed by bizarre trees. Something in the trees became hostile, attacking Hush and her squad, and nothing they tried seemed to work to stop the attacks. They were eventually able to escape when their squad's spellcaster set a fireball down to destroy the trees, but in the process the squad was also hurt by the blast and forced to retreat. Hush's mentor shielded her, but is implied to have been at least badly hurt, possibly killed in the process.

A second squad was sent to investigate once Hush's got home, but the fire had caused too much damage and there weren't any clues. Their only lead was several shards of something black that none of them could identify that had gotten lodged in Hush's mentor's scarf. Eventually the Toborrans decided to send out Hush's squad individually to different places in Temphere to try and investigate the matter and see if they could find any clues as to what exactly had happened to the village. Hush's journey eventually led her to Kaldara, where she happened to hear of a local nobleman who was offering a reward in exchange for help dealing with a problem that involved "missing gardeners", "strange magic" and "danger." It sounded similar enough to what she had seen- missing people and dangerous magical plants- to warrant investigation, and so Hush presented herself to Valanthe as just another adventurer responding to his job listing.

During the second session of the garden adventure, Hush was introduced as a latecomer in responding to Valanthe's hiring call for adventurers. She joined up with Anther, Dahlia and Cree, helping back them up with the sheer muscle and high defenses they all lacked. Although she had some issues with the small size of a few of the garden's enemies, when she managed to hit she hit pretty hard, and her high armor class and hit points meant she was very good at distracting foes from attacking her squishier teammates.

Interlude - The Festival of Masks Edit

Like the others, Hush agreed to stick around after the garden adventure at the request of Valanthe Liadon. While she was waiting for him to conclude his business, she agreed to go along with Cree, Dahlia and Anther to the Festival of Masks. To her consternation, the festival runners pranked all of their guests by stealing one item and forcing them to earn tickets at the festival games to win the item back. In Hush's case, this item was "a letter from someone important."

Hush had difficulty with a lot of the festival games, crushing her pumpkin during the pumpkin carving, experiencing extreme frustration with the lizard racing event, and coming out of the fortune reading very grumpy but refusing to explain why. Her day was brightened somewhat when Anther shared some extra tickets to help buy Hush's way into the area where they would be finding the stolen items, and when she got a hug from Dahlia after all was said and done.

Hush expressed agreement with Cree and Dahlia when they wanted to try to address the problem of the Black Claw, and followed along quietly for most of this adventure, as was her wont.

Adventure 3 - Into the Frostfell Edit

Hush was as dismayed as everyone else when she learned that their old enemy from Valanthe's garden had returned, though she accepted the help of Fracture and McGuiggan in dealing with the problem without argument. When she realized the group would be crossing into the Elemental Plane of Ice, however, she was very much displeased, being much more accustomed to the hot, humid tropics. She opened up a little to her teammates during the adventure, admitting that she was once part of her people's military. Eventually the cold weather took its toll on Hush, and she started to become visibly exhausted. When she woke up the morning after they got back to Temphere, it became clear that she had come down with a bad cold. She tried to insist that she would deal with it, but the rest of the party convinced her to rest and return to Liadon Manor once she recovered her strength. The party's guide Medea remained behind as well to look after Hush.

Once the party finally returned to Caellond, they learned from Valanthe's steward Serena that Hush had indeed made it safely back and recovered from her cold. However, she had apparently been distant and seemed in a low mood, which concerned them. After doing some shopping around town, the party looked for Hush and found her in the manor gardens. After telling her about the ghosts they'd had to fight at the monster hunter's residence, they then asked Hush what she was up to. She explained that she was training, as she felt she hadn't been much help in combat and had even been an hindrance. The party tried to argue with her, but upon realizing her point they conceded to her concerns and offered to try and help train with her.

Hush then asked the party what they'd found out about the giant thorn. The party explained that they hadn't learned much, and the best they could discern was that the thorns had spent time in multiple planes, and that they were possibly from something similar to a gulthias tree. Hush was disturbed by this revelation, and began to suspect that the black shards she had found in her mentor's scarf were shards of another black thorn. She finally revealed her true intentions to the party who were naturally quite disturbed by the idea that whatever was going on was big enough to span multiple continents. They asked if Hush had told any of this to Valanthe, and she admitted that she hadn't, but at this point probably should. The group all agreed that in the absence of other leads, their next best bet was probably to go along with Valanthe's plan and see if anyone at the upcoming ball in the Feywilde might know anything about the thorns.

Cree then announced her intention to spend the rest of the evening celebrating their return to Caellond at the tavern, and invited anyone who wanted to come along to accompany them. Hush agreed to join them, but not get drunk. She ended up carrying Dahlia back that evening.

Hush attended dance lessons with the rest of the party over the next few days, and spoke briefly with Cree. They discussed Tobora, parties, and languages, in particular Elvish.

As Hush herself has put it, she is "very taciturn." The tabaxi seldom speaks unless first spoken to, and when she does pipe up she usually says whatever she has to say as succinctly as possible. This isn't to say that she is brusque or unfriendly, however. Hush is fairly patient and tolerant of jokes at her own expense (when she gets them) and will engage polite conversation readily enough if drawn into it. When she's angry or frustrated she tends to keep it to a single terse comment, or even a silent flicking of her tail, rather than a temperamental outburst such as Anther is prone to. Hush can at times also be a bit dense, "showing off her -2 intelligence modifier." 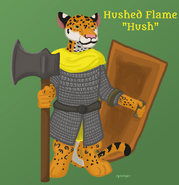 Hush in the 2020 Temphere-Thrrasir Pride Parade
Add a photo to this gallery
Retrieved from "https://dnd-temphere-and-thrrasir.fandom.com/wiki/Hushed_Flame?oldid=711"
Community content is available under CC-BY-SA unless otherwise noted.