Start a Wiki
Faerie dragons are a species native to the certain forests in Thrrasir. They are very extremely small dragons with humanoid-level sapience, though their diminutive size makes them relate to the world in somewhat different ways than larger species. They have magical abilities, including casting charming magic, and a breath weapon called euphoria gas.

A faerie dragon's coloration reflects their age, with red being the youngest and purple the oldest. According to Igraine , they are an amalgam creature, a mixture of Fey and Dragon.

The party has currently met four faerie dragons in Alu Lyth, who escaped from a place where the rest of their clan are being held prisoner. Like all NPCs, the faerie dragons are played by Shinko.

A swarm of faerie dragons in the woods near a village of forest gnomes and wood elves was tricked by a group of lost elf adventurers, who the dragons guided to the town. The adventurers used pies with tranquilizing drugs to make the faerie dragons sleep, then captured the swarm and their eggs, most of which didn't hatch.

During the roughly five years that followed, the faerie dragons were kept imprisoned by elves and half-elves somewhere in or near Alu Lyth. They were potentially being harvested for their euphoria gas. The young dragons were socialized by the elves, leading to them learning languages other than Draconic and Sylvan, and to potentially have more loyalty to the elves than to the dragons. All the young disappeared from the rest of the swarm when they came of age to breath a significant quantity of euphoria gas.

During the massive storm that occurred during the grungs' search for the cube, a small group of the dragons escaped and made it to an under-construction clocktower. The Vigilante Guild took notice of strange instances of non-elven construction workers wandering back out of the clocktower; upon investigating, the party discovered the four faerie dragons. The party was able to convince the dragons to let them help find and free the rest of the swarm, with help from the youngest of the faerie dragons, Marshmallow.

From left to right: Mandrake, Elderberry, and Nettle 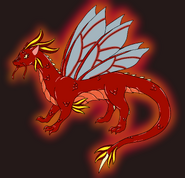 Marshmallow
Add a photo to this gallery
Retrieved from "https://dnd-temphere-and-thrrasir.fandom.com/wiki/Faerie_Dragons?oldid=445"
Community content is available under CC-BY-SA unless otherwise noted.