Dahlia is a Player Character from the Temphere universe, an original member of the Garden Party and current member of the merged Main Party. She is a halfling Life Domain Cleric, devoted to Caluxan, the genderless god of medicine. Dahlia is played by Ginz.

Dahlia grew up in a peaceful tight-knit Halfling community, pretty sheltered from the outside world. She worked as a librarian, and spent most of her days with her nose in a book, studying magic and learning everything she could about a variety of subjects.

Dahlia is very sweet and friendly, although maybe a little naive and too quick to trust others. She is a huge bookworm, but has little practical life experience. As a cleric, she's morally opposed to killing, but she will fiercely defend those she loves, and she seems to have plenty of beginner's luck, so enemies better watch out! 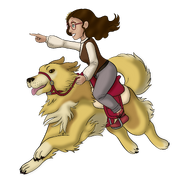 Dahlia as a gold dragon for lols

Dahlia and Marigold in their winter wear
Add a photo to this gallery
Retrieved from "https://dnd-temphere-and-thrrasir.fandom.com/wiki/Dahlia?oldid=283"
Community content is available under CC-BY-SA unless otherwise noted.