Hole in the Wall Circus (Formerly)

Cree is a Player Character from the Temphere universe, an original member of the Garden Party and current member of the merged Main Party (as yet unnamed). She is a black dragonborn bard affiliated with the College of Lore. Cree is played by Shinko.

As the game is in early days still, not much has been revealed as of yet about Cree's history before she joined up with the party. It is known that she was an orphan, Cree having stated that her egg was abandoned before it hatched and she never knew her birth parents. It is also known that at some point after her hatching she was adopted by and grew up in a circus, and it was with the carnival folk that she learned her skills as a bard. Cree left the circus to become an adventurer twelve years before taking a job to help a certain Valanthe Liadon with some problems in his garden...

Cree joined the original Garden Party- a group consisting of Anther, Dahlia, and Ceres (later replaced by Hush) on their first adventure through the garden of Valanthe Liadon. The garden had become inexplicably hostile, and the satyr gardeners had gone missing. During this adventure, Cree's firestarting Prestidigitation cantrip saw a great deal of use against the various plant-based enemies.

The party eventually discovered that a giant monster rose had infested the garden with dark magic, thralling the satyrs and pulling hapless residents of the Feywilde into the material plane. The party attacked the rose, and though Cree was knocked out in that fight they ultimately won the day. The rose left behind a mysterious, giant black thorn that no one could identify, and Valanthe asked the party to stay in the town of Caellond while he looked into the matter.

Under the care of healers hired by Lord Valanthe, Cree recovered from her injuries in the garden. By the time of the annual fall holiday known as the Festival of Masks she was fully recovered, and happily agreed to attend the festival with Hush, Anther, and Dahila.

At the festival, however, a holiday prank saw each member of the party having something stolen from them- in Cree's case, this was a small brass ring. She and the others played various festival games in order to win tickets to the event where they could reclaim their lost objects. Though Cree was somewhat grumpy about the unexpected prank, her circus upbringing meant she was overall not too worried about it- confident that even if they didn't "win" their stolen possessions were probably not gone permanently, because that would be a distinctly unfun game- and spent a lot of her time keeping Anther's temper in check.

When asked by the "Prince of the Shadowfell" - a costume character at the end of the festival game- to offer something in trade for her lost possession, Cree used magic to play a cryptic soundbyte of an old man and a young girl singing together. She didn't offer any context, but this was sufficient to satisfy the "Prince," and she was returned the ring.

After the end of the festival, Lord Valanthe asked the party if they would carry the black thorn to a monster hunter who might be able to identify it. The only catch; this hunter was a paranoid recluse who was living in hiding, and very few people knew her location. Fortunately, Valanthe was able to put the party into contact with one such person- Medea, a korred satyr who kept track of the hunter for the Fey Court. The party agreed to travel with Medea, and set off from Caellond.

Along the way they briefly met up with a trio of werewolf hunters, saw a dragon, and eventually came to a murky, dismal swamp. While passing through the swamp, the party accidentally triggered a trap that saw them ambushed first by bugs, then by a bandit group of lizardfolk and kobolds. Thinking fast, Cree managed to convince the bandits that Dahlia was a gold dragon wyrmling in disguise- to her surprise as much as everyone else's- and the group was allowed to pass unharmed.

After speaking to multiple people in the village of Mire's Edge who'd been victims of the scalefolk- calling themselves The Black Claw- the party (with the exception of Anther) agreed that something should be done about the bandits. Though the Mire's Edge folk were convinced the local tribe of lizardfolk, the Shifting Mist, were behind the attacks, the party went to the scalefolk village of Kuria to find out the truth for themselves. Along the way, they saw a spirit coatl, which seemed to be pointing them off towards the west. At Kuria, the party learned of a Yuan-Ti temple recently risen from the swamp, and a joint scalefolk and human archaeological group that was lost in the temple shortly before the appearance of the Black Claw.

Venturing to the temple, the party managed to fight their way through the scalefolk bandits hiding out there. Eventually they reached the lowest level, where they met up with a winged kobold named Yuty and a young green dragon named Dodriar. The duo explained that the Black Claw had originally wanted to make the swamp inhospitable for Mire's Edge, and get the humans there to leave the swamp. However certain factions in the Black Claw- lead by a kobold called Wenrule- had been taking more and more violent action to achieve their ends. Dodriar and Yuty asked the party for help resolving the matter, and they agreed to try to talk to Wenrule. Talk proved to be something Wenrule wasn't interested in, however, as he used a silver snake staff to cast Charm Person on Dodriar and started a fight.

Incredibly angry at the kobold for using mind control magic on a child, Cree attacked Wenrule savagely, managing to steal the staff from him in the process. After a chaotic fight, Wenrule was defeated, and Cree was able to examine the staff with Identify. She realized it was called the Silvertongue Staff, and that it made anyone wielding it more charismatic and let them cast charm person once a day without using a spell slot. Yuty advised Cree to hold on to the staff, as she didn't trust any of the Black Claw with it.

After convincing the Black Claw to surrender and negotiating peace between Mire's Edge and Kuria once again, the party continued on their way.

Third Adventure - Into the Frostfell Edit

At this point, the Garden Party arrived in town called Penvost, where they formally met the PCs from the other Temphere party, Fracture and McGuiggan, for the first time. The two groups made friends with one another during the evening, only to be woken abruptly in the morning by a peal of thunder and fire in the forest.

After fighting the fire and rescuing the hapless firestarter- a half-elf called T'hamil- the party learned that T'hamil had unearthed a second black thorn like the one in the giant rose. He'd tried to destroy it by calling lightning, but the attack had no effect and the thorn sprouted vines to escape. At the request of a member of Penvost's city guard the party agreed to chase after the thorn... only to discover that it had fallen through a crossover into the elemental plane of ice, the Frostfell.

The party somewhat reluctantly chased the thorn monster through the crossover, where they were fortunate to almost immediately encounter some friendly mephit merchants who sold them winter clothes and firewood. After getting directions from the mephits, the group agreed to break from the trail of the thorn (which would've taken them through the very cold open ground in the driving winter wind) and instead passed through an ice cave (where Cree got to talk to a white guard drake). Eventually they reached the end of the cave and came to a river with an obvious gouge where the thorn monster had crossed. As the group slowly and methodically picked their way across the river, they came under attack from first a sabertooth tiger, then a yeti.

After defeating the predators, however, the wind picked up immensely, starting to become a true blizzard. The party retreated into a nearby cave for shelter, and upon exploring the place found that it seemed to have once been the home of a group of frost giants. The only giant they found inside was a huge skeleton, however, and the live creatures in the cave consisted of more saberteeth and a few giant super-heated bug monsters called remorhaz. The party managed to clear out enough of the threats to get somewhere reasonably sheltered to wait out the storm. In this quiet moment the party finally talked to one another, learning about each other in the process. Cree in particular revealed that she was mostly a bard because of her circus upbringing and wasn't too personally attached to the job, and stated that she was adventuring out of a desire to help people, not to write a masterwork of music as McGuiggan was. She also mentioned that she was an orphan, something that prior to this conversation had only been very vaguely implied by her mentioning that the circus she grew up in was run by halflings and humans, but never bringing up other dragonborn.

Eventually the party slept, and just before dawn the following morning the storm finally stopped. The party set off again, finding to their chagrin that the monster's trail was gone after the blizzard. Hoping it would just keep going straight the group set off in the direction it had been fleeing- due north. Eventually they ran into a group of winter wolves being attacked by mephits, and despite Anther's lack of concern for the situation Cree was determined to help the wolves. She tried intimidating the mephits, but they weren't smart enough to take the hint and picked a fight, bringing in an ice elemental to help out. The part defeated them, and in thanks the wolves used a howling chain to ask other packs where the thorn monster had run to. When it proved to be too far to catch on foot, the wolves also offered to introduce the party to a group of tundra hippogriffs who could carry them.

Cree is generally a jovial, good-humored character. She loves to tease people, especially the people she's close to, and is more than willing to take a good-natured ribbing of her own in reply. This attitude occasionally gets her dismissed by others, who find her annoying or foolish, but she is surprisingly competent when she wants to be. Her capacity for creativity and spur-of-the-moment improvisation have proved handy on multiple occasions. She can also turn deadly serious when the situation calls for it her normal snarky jokes utterly vanishing when she gets sufficiently angry. 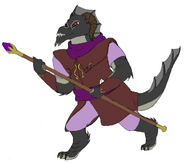 Cree dressed for the Frostfell. 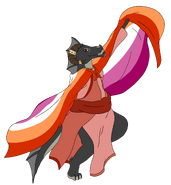 In case anyone was wondering which team Cree bats for. 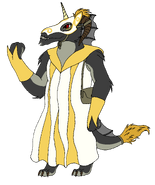 Cree's unicorn costume for the Festival of Masks. 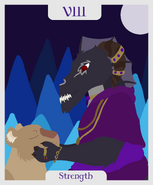 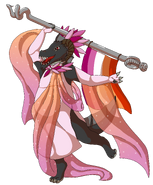 Retrieved from "https://dnd-temphere-and-thrrasir.fandom.com/wiki/Cree?oldid=694"
Community content is available under CC-BY-SA unless otherwise noted.