More properly known as "Ashton," but referred to by everyone who knows her as Ash, this drow elf is a monster hunting NPC from the Temphere campaign. She was sought by the adventuring party as a source of information about the various monsters they have been encountering. Ash is incredibly paranoid and elusive, making her difficult to get in touch with. Like all Temphere NPCs, Ash is played by Tiger.

Ash has apparently been a monster hunter for quite a long time, and is proficient enough at her job to have gained some renown. She is acquainted with Lady Sahara of the fey court, the Helders, and the druid Shalana, and is implied to have helped them or worked alongside them in the past. She may or may not know the korred satyr Medea, as Medea implied it was her job to keep tabs on where Ash is at any given time for Lady Sahara, but when referencing her Ash only said she'd been told to expect "a saytr guide."

However, her long and prolific career has made Ash the frequent target of various groups trying to get revenge for slain monsters. She mentions "pissed of mate[s]", "sycophantic cult[s]" and apprentice[s] explicitly, though it can be assumed she's seen a lot of monster-hunter-hunters. Enough so that she keeps the location of her home a very tight secret, revealing it only to a few trusted associates, and moves frequently to confuse any pursuers. Her home is surrounded by an insanely convoluted obstacle course to slow and deter attackers, and the lodge itself is sealed by multiple locks and protections that take five minutes to fully activate.

She has been partnered with Brenryn for at least a hundred years, the two of them working as monster hunters together and eventually getting romantically involved. Brenryn has implied she wants to marry Ash, but Ash has declined out of fear that if she dies in battle Brenryn would be left alone.

Cree, Dahlia, Anther and Hush were tasked with seeking Ash out to ask her for help with identifying the giant thorn that was found in Valanthe Liadon's garden. Upon arriving at the lodge, the group's first encounter with Ash involved her vaulting out of a window, the glass shattering around her, as she fled from a ghostly vampire. Brenryn, who was leading the group at the time, somewhat exasperatedly noted that she couldn't leave Ash alone even for a few days. Ash explained that she and Brenryn had recently been tracking a necromancer and managed to kill her, only to discover that she had a surviving apprentice. They managed to corner him, but to their surprise he tripped on a stair and died in the fall, leaving behind only a curious music box that played itself at regular intervals.

Ash revealed that the music box apparently was possessed by the ghost of the apprentice necromancer, who was using it as an arcane focus to reanimate ghostly versions of numerous monsters Ash and Brenryn had previously fought from monster remains they had confiscated. Though Ash at first wanted the party to remain safe outside, Brenryn vouched for their skill in battle and ability to help out. She and Brenryn went to their vault to fight the worst of the monsters, while the party cleaned out the infirmary, the testing room, the garden, the alchemy lab, and finally the library. The library was home to a hanging skeleton of a wyvern, which Ash was stunned and exasperated to learn had been reanimated when she came upon the scene mere moments after its defeat by the party.

Once the lodge was fully cleaned out, Brenryn and Ash settled down to help the party identify their various monsters. They were able to figure out that Edith's forest was being prowled by at least one, possibly several displacer beasts, and that the coastline where McGuiggan and Fracture had been was being menaced by a deep scion. However, despite both of their best efforts and numerous tests and experiments, neither Ash nor Brenryn was sure what the black thorn was. Their best guess was something like a gulthias tree, the sort of tree that spawns blights, but they admitted gulthias trees don't have thorns.

They suggested that the best course of action for the time being was to deal with the easiest solvable problem; they offered to head to Edith's forest to hold down the fort there, while the party traveled back to Caellond. Once they got there, they were to petition the eladrin lord Cree, Dahlia and Anther worked for, Valanthe Liadon, for help contacting a blink dog to assist in getting rid of the displacer beasts. The party agreed with this plan. They then had a brief, lighthearted exchange in which Cree and Anther accused Ash and Brenryn of acting like an old married couple, to Brenryn's amusement and Ash's profound embarrassment. Ash left the room, but Brenryn confirmed that they were together, sort of, but nothing official was in the offing quite yet.

The following morning, with the music box exercised, Ash and Brenryn led the party back to the road to Penvost before taking off towards the forest to help with the displacer beasts.

One must assume that Ash has a strong sense of morality and civil duty, because she clearly isn't in the monster hunting game for the fame or enjoyment of it. She avoids anyone she doesn't explicitly trust or who hasn't been vouched by someone she trusts out of fear of vengeful allies of those she slays, seems to regard tracking and killing monsters with supreme exasperation, and at least privately to Brenryn acknowledges that her line of work is very likely to win her an untimely death. She's sarcastic and impatient, extremely paranoid, and based on how Brenryn reacts to some of the things she says, apparently rather bull-headed when she wants to be.

However, in spite of her reluctance to trust people outside her limited circle, when the party asked for her help she readily gave it, without even stopping to take a nap after clearing her lodge of ghosts. She clearly has the respect and trust of everyone she meets, as anyone who knows of her suggests her as a source of information and help to those dealing with strange monsters without hesitation. And based on her reluctance to marry Brenryn because she might leave her alone, it can also be surmised that she is extremely selfless when it comes to those she cares deeply for. The party only got to meet her briefly, and so only saw glimpses of what might lie beneath the surface of her prickly defensiveness, but she definitely comes across as someone who has a lot of layers to her, and a trustworthy ally to have on your side. 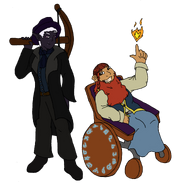 Ash and her partner / definitely not girlfriend, Brenryn.
Add a photo to this gallery
Retrieved from "https://dnd-temphere-and-thrrasir.fandom.com/wiki/Ash?oldid=636"
Community content is available under CC-BY-SA unless otherwise noted.