The party first encountered the sprites when they were on the opposite side of a fast-moving river. A bridge between the two banks made entirely of thorny vines was trying to grow towards the sprites and attack them, and they were just barely holding it off with their magic. Eventually the party were able to work out how to turn the bridge into an ordinary wooden bridge, and crossed the river to meet the leader of the sprites, Anwyse.

Anwyse explained that she and her warriors were willing to help the party by using their magic to unlock a pair of sealed gates. In exchange they asked that the adventurers find some naga venom and hydra thistle that the sprites could use to poison their weapons for self-defense. The party agreed to this favor, and after significant trials and tribulations, managed to return with the poisons.

The party had to leave the sprites behind for a time, as breaking the dark magic holding the gates locked left Anwyse's mages exhausted and she was unwilling to progress through the garden until they had time to rest. She did reappear later, however, her men helping Shahrukh to hold off an army of satyrs that tried to stop the party from defeating the monster rose. After the rose was defeated, she and the sprites accompanied the party back to Valanthe's manor. They have not been seen since then, and are presumed to have returned home to the Feywilde.

Anwyse is very stern and buisnesslike. She can be a bit gruff and short-tempered, though she is at least careful not to mis-aim her ire when she does get annoyed at something. She acknowledges favors paid to her and does her best to return them in kind. 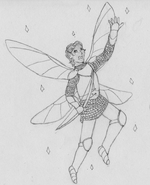 Full body sketch of Anwyse.
Add a photo to this gallery

Retrieved from "https://dnd-temphere-and-thrrasir.fandom.com/wiki/Anwyse?oldid=526"
Community content is available under CC-BY-SA unless otherwise noted.